I Am Woman, Hear Me Snore: A Cathy Comic Crash-Course for Millennials 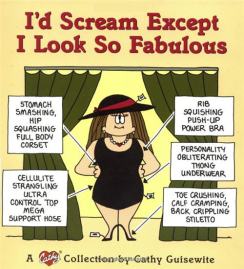 I’d Scream Except I Had an Auto-lobotomy.

Did you know there are women’s comic strips? Because there are! But sometimes you can go through much of your life without addressing, or even really recognizing, the huge impact of a cultural phenomenon that at one time was taking place all around you. Thus, during a recent bout of insomnia that drove me to read the entire Internet (and also because RESEARCH) I made a couple of really messed up discoveries about the iconic women’s comic strip Cathy.

See – and this is the part I did know about – according to many women’s writers and artists (Did you know there are women’s writers and artists, also?) there is basically an entire world of women (but no men) who feel fat and weigh themselves daily and think about chocolate, dating, and Mom, like ALL the time. In a way that is tooootally not infantilizing! If you don’t believe me, just check out the below excerpt from women’s writer Virginia Woolf’s blog, which was called a “journal” at the time. As you will see, she shared these same fundamental concerns.

“So many days, now, thoughts of chocolate, a dream come too often, had floated in her mind, he did not call, he did not call still, why did he still not call? ‘Oh Mother!’ she cried – for all she could do was cry, the words came forth, he did not call – ‘It seems that this leftover Halloween candy must fill the lack.'”

For all of the years of my childhood and most of the years of my adulthood, the iconic women’s comic strip Cathy was considered by women to be comic gold because it was just SO EXACTLY HOW IT IS TO BE A WOMAN ALWAYS IN LIFE ALWAYS. Let’s delve further, shall we?

Here are some things that my friend Internet tells me are true about the iconic women’s comic strip Cathy.

The Conclusion, Which, Like All Conclusions Written by Women, Has Something to Do With My Uterus

Oh my. It seems the stress of being analytical (like in iconic men’s comic strips such as Doonesbury) has caused large, line-drawn sweat droplets to shoot vigorously out of my face.

Do I sound irritated? I’m a little irritated. Which means I should probably get to the serious part.

I recognize that this piece may sound a bit aggressive, and let’s just say that analytical crabbiness is hardly a “guilt group” for me, so I’m not entirely unsympathetic to arguments that I’m getting all worked up over something relatively unimportant. I mean, why, with all the bad things that are happening to both the abstract concept of feminism and the actual lives and equity of women all over the world, do I have such a bee in my bonnet that I just spent 2,000 words on ripping a dinky little comic strip a new one? Cathy‘s been out of print for two years, no one really reads it anymore anyway, and all available information about Guisewite indicates that she is really nice. Like really, really nice. So in some ways, Cathy didn’t even much shape my life as a woman, right?

Except no. For one thing, in terms of the longitudinal shitshow that is the history of women’s rights, the 1980s were really recent. My mom, and a bunch of other women who raised the women in my generation, did read Cathy. Even if they didn’t read it religiously or particularly seriously, it was there every morning when they opened any of 1,400 newspapers to see what was going on in the world. And 1,400 newspapers, in the days before digital media and the centralization of media ownership, is A LOT of newspapers. This means that the process by which people within about 15 years of my age in either direction were socialized into being women had partly to do with the gender stereotyping Cathy so wholeheartedly embraces. And here’s the thing: when you put a damaging stereotype about me and everyone else who happens to share my anatomical features – and possibly nothing else –  into the world for almost my entire life so far, I get irritated, because I have to now live in that world.

So sure, in some awful alternate universe there could be a whole collection of Frida Kahlo self-portraits in which she sips Mexican chocolate in her ratty old pantalones deportivos. And that could be called both “liberating” and “art”. But the thing is, we live in this universe, and there isn’t. And what with the wage gap, required vaginal ultrasounds for abortion-seekers, and a political culture that differentiates “legitimate” from “illegitimate” rape, there isn’t a lot of time to exclusively devote one’s identity to conversing with leftover peanut butter cups and saying pithy and self-deprecating things to dressing room staff about bathing suits.

Even worse is the fact that women consistently do struggle with Cathy’s “four guilt groups” because creating fictional worlds in which these things are the organizing ontological principle encourages actual women to see themselves in this restrictive light, and to think that it is normal and healthy and unlikely to influence their happiness one way or the other. When the culture is flooded with stuff of this nature, there isn’t nearly enough conceptual space for the nuanced identities of women who don’t do this, or do this but wish they did it less, or do this sometimes but don’t want it to be the only thing people think about when they think about them.

That the women of my generation went from being girls to being women in the shadow of the Cathy ethos is part of the reason why, when I was talking with a coworker in an elevator about how I needed a better way of carrying all my projects to and from work than the small (and not particularly gendered) tote bag I was carrying, a man I’ve never met before interrupted our conversation to say “Handbags, huh? Sounds like girl talk to me!” It’s part of the reason why a male supervisor thought it was even marginally okay to address me as “young lady” in the workplace in 2011 (or ever). And it’s part of the reason why there are still so many women who feel the need, and are encouraged, to stick to supposedly inoffensive, culturally prescribed topics such as weight, chocolate, and guilt, whether or not these topics are of interest to their real selves, or are truly either inoffensive or harmless.

So maybe after we laugh with relief that this wasn’t the only vision of woman-created art we were raised with, we can start paying more positive attention to stuff like this.

Q.E.D., as they say (that means quod estrogen demostratum),
DBDB

3 thoughts on “I Am Woman, Hear Me Snore: A Cathy Comic Crash-Course for Millennials”

© Diana Barnes-Brown and Diana Bee Dash Bee Tries Really Hard, 2012. Unauthorized use of this material without permission from the author is prohibited.